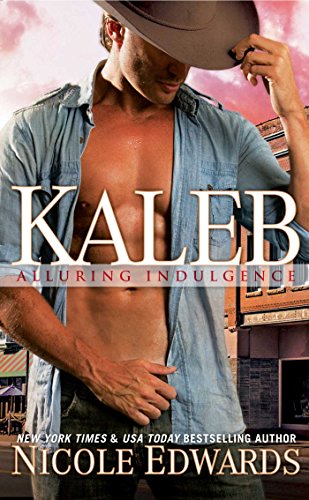 Kaleb and Zoey have been best friends since childhood, but that’s all it has ever been. Now, they are both all grown up and the crush on the boy next door has changed into something new. What will happen when these two lifelong friends discover their secret fantasies?

Kaleb is the first book in the Alluring Indulgence series by Nicole Edwards. There are a total of eight books in this series.

So I actually picked up this books because it was mentioned in another book I was reading. The main character of the other book was reading this one and I was curious as to why the author loved it so much. My curiosity got the best of me and I picked it up.

I  have such mixed feelings about this book. I went into it not really knowing what to expect and got quite a shock as I read it. Maybe I would have been better off if I hadn’t gone in blind.

I feel like I also need to state that this was my first Edwards novel. This book is definitely erotica and does not shy away from intense scenes. There were a few that were a little out of my comfort zone, but overall it was exactly what one wants when they pick up an erotica.

Zoey and Kaleb were interesting characters to follow throughout this book. Zoey was portrayed as the simple girl next door that everyone loved,  but she was so much more than that. She was strong and willing to do whatever it took to take care of her and her father. She had horrible events in her past, but she didn’t let them destroy her. Kaleb, on the other hand, is the bad boy who never let anyone see the real him. No one except Zoey. While the roles they filled seem ordinary and even overused, Edwards did a really great job of making it fresh and new.

I liked the idea of the Alluring Indulgence resort, but I won’t go into detail about it to avoid spoilers.

This book kept me on my toes. I knew there was something that I wasn’t being told from the very beginning, but I struggled to figure out what it was. I did eventually discover the secret but it didn’t happen until about halfway through.

I gave this novel 4 out of 5 stars, but I need to make it clear that unless the reader is okay with the more taboo topics such as threesomes that they might not like it. I have a feeling that this was the tamest book in the series, but I have no evidence to back that up.