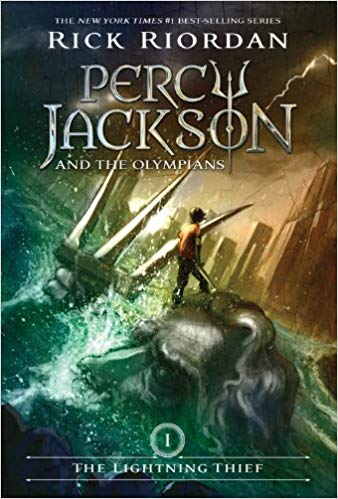 The Lightning Thief is the first installment of the Percy Jackson and The Olympians series by Rick Riordan. I watched the movie before reading the book and that might affect my opinions and review.

Percy Jackson is just another kid, who has a temper and struggles to focus on school, or so he thinks. When his teacher turns into a monster and attacks him, Percy is sure the universe is playing a joke on him. That is until his mother decides it’s time to tell him the truth about his father.

Camp Half-Blood is a summer camp for demigods, which to Percy’s shock are more than just myth. When Poseidon, the God of the Sea, claims Percy as his own, the summer takes a turn for the worse. Hellhounds and Minatours are the least of his problems. With a satyr and the daughter of Athena by his side, Percy sets out to solve the mystery of the stolen lightning bolt and hopeful prevent his father from going to war with his uncles.

I have been putting off reading the Percy Jackson series for a while now. I wasn’t into mythology when I was younger so I didn’t read it. Now that I am older, I was scared that I wasn’t going to love it as much as everyone else did. I had seen the movie and I wasn’t impressed by it.

However, I am so glad that I picked up this book. It was so much better than I ever would have expected. The books put the movie to shame, which isn’t too surprising but that’s not the point. There was so much more going on behind the scenes than I ever would have thought possible. So many of the stories are brought together in this book. I wish I had read it earlier and now I can’t wait to read the rest of them!

Percy was a fun character to follow through the story because he was so normal at the beginning. He was worried about his grades and not getting kicked out of school. Though I have to say I would have been much more worried about my mother’s reaction to being expelled than he was. But we get to follow him through this huge change in his life and watch as he comes to terms with everything that he learns.

The dynamics of Camp Half-Blood seem very strange to me. The director of the camp did not care about the kids at all and there was a lot of bullying occurring right under the adult’s noses. This made for an interesting story, but it was hard to overlook.

The writing itself was perfect for the age range that the Percy Jackson series is aimed towards, which is ten to fourteen-year-olds. But even as an adult, I was able to relax and enjoy the story without the writing bothering me, which is not as easy as you would think. I often get frustrated when reading books on this level, but this one did not phase me in the slightest.

Overall, I gave this book 4 out of 5 stars and am looking forward to picking up the next one soon. I recommend this series to anyone who wants a modern take on mythology and can handle the fact that it was written for children.