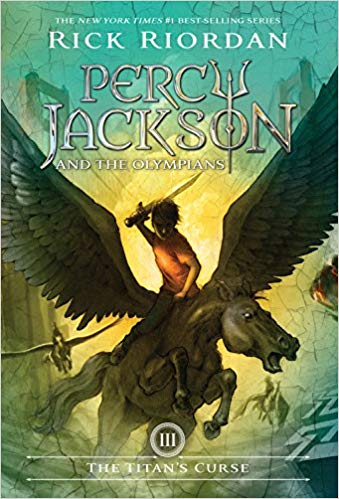 They must find the kidnapped goddess before the Winter solstice, but the deadline is fast approaching. If Artemis isn’t rescued before the solstice then she will miss the annual Olympian Council and the chance to vote on whether they are going to war with the Titan’s. Will they save her in time or is it already too late to prevent the Titan’s from starting a war with the gods?

I had no idea what to expect going into this novel. While I had watched the two movies before reading the previous two books, there was never a movie made for this book so thankfully I was in the dark about the events that were about to occur. While this book was a little slow in the beginning, I am so glad I stuck it out because I was not disappointed!

More of the gods and goddesses were brought into this novel, while we also saw the ones we had met in the past. We also got to see several more mythical creatures. I really love the way Riordan introduces each new person or creature because he explains the myths without bogging down the story with too much detail. He gives the reader just enough to understand the significance of the character.

There was significant character growth of Percy in this book. He really learned what was important and what wasn’t in this book. While he still has his moments of immaturity, what else can you expect from a fourteen-year-old? He did what had to be done and didn’t take the longest path possible to get there this time, which was my biggest problem with the two previous books.

I really enjoyed getting to know Thalia in this book as well. I was really interested to see how powerful she was going to be. More than anything though, I was shocked by how similar Thalia and Percy were, but even with their similarities, they made drastically different choices. I loved seeing the way they interacted.

The writing was very easy to read, but not too simple. I was able to get lost in the story, but I was not bothered by a lack of skill when writing. There is a reason Riordan is such a successful author. I am growing to love his writing style and I think that it is perfect for his targeted age range.

Overall, I really enjoyed this novel and wish I had read it when I was younger. I gave this book 4 out of 5 stars and highly recommend this series to middle school-aged children.