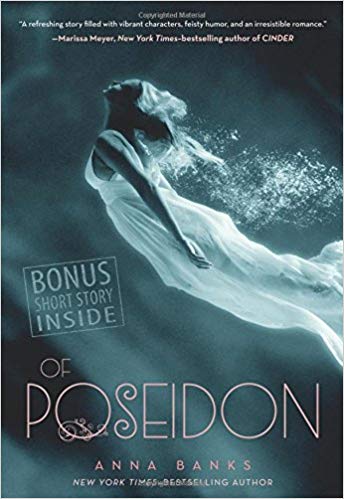 Of Poseidon is the first book in the Syrena series by Anna Banks.

When Emma goes on vacation to Florida with her best friend, tragedy stricks, but not until after she runs head first into the most handsome man she had ever met, literally. As Emma comes to terms with the fact that she lost her best friend, school begins back in Jersey. Going to school alone is going to be hard enough, but Emma never expected the mystery man to show up at her school.

Galen, a Syrena prince, hates humans. How could he not? But when he meets a mysterious white-haired girl with violet eyes, he needs to know if she is one of his own, especially after he learns she can talk to fish. Can her gift save his underwater kingdom? He needs to know, but the only way to find out is to prove that she is who he thinks she is. Will he be able to coax her into the water or will the clumsy girl get the better of him?

I first read Of Poseidon a while back and I really liked it. Now that I reread it, I am sad to say that it was actually a disappointment. I don’t know if it is just because I had it built up in my mind or if it was actually as bad as I thought, but my second read was not nearly as enjoyable as my first.

While I love the premise of this story, I think it could have been done so much better. I think the idea of the mysterious girl with unknown powers being discovered by the Syrena prince was intriguing. I wanted to know what was going to happen and I was excited to watch their relationship develop.

My biggest complaint with this book was the constant head hopping. While sometimes head hopping can be done smoothly and can be beneficial to the story, I felt like Banks just couldn’t make up her mind about who she wanted to showcase. In one scene we could be in two or three heads. It was extremely jarring and really pulled me out of the story.

Emma and Galen were both fun characters to follow and one positive thing I will say about this book is that they both grew significantly as characters. Emma learned a lot about herself, but she was still a fun, stubborn girl who just wanted to know the truth. Galen had to come face to face with his beliefs and decide if he still felt the same way as he did in the beginning. They were an interesting duo to watch.

The world-building was a little disappointing, but I’m hoping that the next two books give me more than what this one did. I felt like I didn’t get to see nearly enough of Galen life as a prince. The majority of their time together was spent on land. I want to know more about the actual Syrena kingdoms.

Overall, I was a little disappointed with the technical aspects of this piece, but I still love the characters and the idea. So I gave this book 3 out of 5 stars. I only recommend this series if you are able to overlook the technical problems.