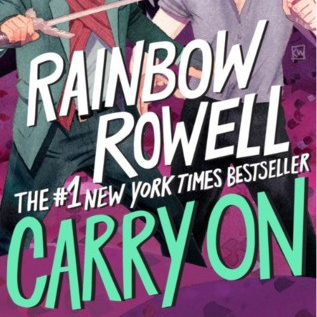 Carry On by Rainbow Rowell is the first book in the Simon Snow series. This review will not have spoilers.

Simon Snow is the worst Chosen One who’s ever been chosen.

That’s what his roommate, Baz, says. And Baz might be evil and a vampire and a complete git, but he’s probably right.

Half the time, Simon can’t even make his wand work, and the other half, he starts something on fire. His mentor’s avoiding him, his girlfriend broke up with him, and there’s a magic-eating monster running around, wearing Simon’s face. Baz would be having a field day with all this, if he were here — it’s their last year at the Watford School of Magicks, and Simon’s infuriating nemesis didn’t even bother to show up.

Carry On – The Rise and Fall of Simon Snow is a ghost story, a love story and a mystery. It has just as much kissing and talking as you’d expect from a Rainbow Rowell story – but far, far more monsters. (Synopsis from Goodreads)

Everything I wanted and more.

I just finished this book and I have so many feelings about what happened.

I had a hard time getting into this book, but several of my friends had read it and they all told me to keep going. So I did. I am so thankful that I did not give up on it. This book gave me everything I wanted and never knew I needed.

Simon Snow is such a horrible chosen one, but he is also a great chosen one. He is powerful, strong, brave, and determined. That’s everything you want in a chosen one right? I love Simon so much. He is adorable and I loved watching him grow and discover himself over the course of the novel. I think he had one of the best character arcs I have ever seen.

Now let’s talk about Baz. *Swoon* I have to admit I am hopelessly in love with Baz. From the moment he walked in, I knew I was going to love him. His POV was my favorite and he was by far the most interesting character in the book. He is so perfect. I looked forward to each of his chapters and always wanted more from him. He might have been a “bad guy” but he stood by his beliefs and I really admired that.

One of my favorite things about this book was how each POV character had a distinct voice. I always knew who I was reading without having to double check, which is harder than it sounds. There were so many POV characters in this book and it switched back and forth so often, but everyone sounded different.

I have to admit that it did take me a lot longer to get into this book than I would have liked. I think I was about 150 pages in before it hooked me. I mean really hooked me. I didn’t hate it before then and I wasn’t bored, but I was indifferent about it. I wish it had hooked me a lot sooner. I think a lot of people have probably DNFed this book before getting to the good parts.

The world building in this book was perfect. I was given just enough to understand what was going on without having to read page after page of description and history. The world is set up a lot like the world of Harry Potter with a few significant differences. I liked that I had the pictures and I was able to understand what everything looked like and how it worked.

As for the writing itself, I was already a fan of Rowell before I started this book and She did not disappoint. There were no excessive typos, no unnecessarily big words, no confusing dialogue tags. Everything flowed nicely.

I have mixed feelings . about this rating as well. Normally, the pacing issue would be enough for me to knock an entire star off my rating, but I can’t find it in myself to actually do it. I loved it so much.

So I am giving this book 5 out of 5 stars. I HIGHLY recommend it to everyone. When you read it (because you really should), don’t give up on it until a few chapters after Baz shows up!

Here is a link to a thread of my live reactions.

Carry On by Rainbow Rowell: A Thread

So I’ve seen a few other people doing live reactions of this book today and decided to join in the fun since I’m read it for the first time too.

One thought on “Carry On by Rainbow Rowell”