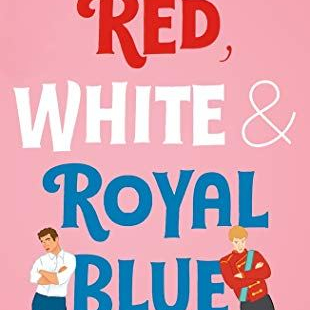 Red, White, & Royal Blue by Casey McQuiston is a standalone LGBTQ Romance. This review will be spoiler-free.

What happens when America’s First Son falls in love with the Prince of Wales?

When his mother became President, Alex Claremont-Diaz was promptly cast as the American equivalent of a young royal. Handsome, charismatic, genius—his image is pure millennial-marketing gold for the White House. There’s only one problem: Alex has a beef with the actual prince, Henry, across the pond. And when the tabloids get hold of a photo involving an Alex-Henry altercation, U.S./British relations take a turn for the worse.

Heads of family, state, and other handlers devise a plan for damage control: staging a truce between the two rivals. What at first begins as a fake, Instragramable friendship grows deeper, and more dangerous, than either Alex or Henry could have imagined. Soon Alex finds himself hurtling into a secret romance with a surprisingly unstuffy Henry that could derail the campaign and upend two nations and begs the question: Can love save the world after all? Where do we find the courage, and the power, to be the people we are meant to be? And how can we learn to let our true colors shine through?

Heart-warming. Angsty. Impactful. Hilarious. Perfect. One of those books that you will never forget.

I could go on and on about this book. I want to gush about this book and squeal over all my favorite parts. But since I promised this review will be spoiler-free, I’ll try to contain myself.

I picked this book up without having read the description because it was recommended to me by some very reliable sources. I don’t know if this helped or hindered me while reading it. I went in completely blind, with very high expectations.  The only thing I knew about it was that there was a prince and it was LGBTQ. The cover clearly shows that.

I have to say I was impressed beyond measure by this book. I wish this book had been published earlier. I hope that it becomes huge. I want a movie. I want it talked about. I want it passed around. I think this book could help so many young people.

When I first started it, the first few chapters were a struggle for me. I did not get pulled into the story until we met Henry. I didn’t know why I was supposed to care about any of the characters. They weren’t relatable. Not in the beginning. There were too many introduced and I struggled to keep them all straight in my head.

But everything changed as soon as I met Henry. I was instantly obsessed. I was laughing and crying (because I was laughing so hard). The situations that Alex finds himself in were just too much (in a good way). I found myself shaking my head and rolling my eyes at him.

Everything about their relationship was what I wanted. I am a sucker for enemies to lovers. We all know there is a fine line between love and hate. I love to see people walk it. But that wasn’t the only trope in this book. We got to see enemies to lovers,  friends to lovers, and royalty.

Alex was determined, ambitious, confident, intelligent, and hilarious. He had a relatively normal childhood and then was thrust into the spotlight when his mother became president. I loved it. He knew the people because he had been one. All he wanted to do was help the people. He wanted to go into politics because he actually wanted to make a difference.

Henry came off as very pretentious and aloof at first, but as we got to know him that all changed. He is kind and considerate. He is loving and adorable. But he is also strong and charming. He was scared to reveal the true him to the world because of who his family was. He is a Royal and there are expectations.

Then there are the side characters. June. Nora. Pez. Bea. Zahra. Shaan. Luna. Amy. Each one was so special and unique. They all had their own personality and backstory. Without them, this story wouldn’t have been nearly as good. They were the instigators. They were the supporters. Even Zahra, with her uptight attitude, turned out to be one of the best characters in the book. (Gah. Can I say that? I mean I love them all so much. I feel bad. I love you Nora. You are the best. I love you Pez. You are the best.)

Between the politics and the pop culture references, there were so many real-world comparisons. There was a lot of politics in this book, but as someone who is not a fan, I felt like there wasn’t too much. There was just enough for the reader to understand what was going on and how it was affecting the characters, but no more than that. Plus the pop culture references! I got both Harry Potter and Star Wars. I couldn’t have been happier. I literally choked because I was trying to take a drink and read at the same time and started laughing.

I LOVED this book so much. I still have so many things I want to say, but I will stop here. I gave this book 5 out of 5 stars. I HIGHLY recommend it to EVERYONE! It is so good.

One thought on “Red, White & Royal Blue by Casey McQuiston”