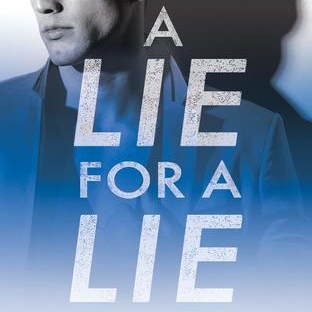 A Lie for a Lie is the first book in Helena Hunting’s new series, All in. This review will be spoiler-free.

Sometimes I need an escape from the demands, the puck bunnies, and the notoriety that come with being an NHL team captain. I just want to be a normal guy for a few weeks. So when I leave Chicago for some peace and quiet, the last thing I expect is for a gorgeous woman to literally fall into my lap on a flight to Alaska. Even better, she has absolutely no idea who I am.

Lainey is the perfect escape from my life. My plan for seclusion becomes a monthlong sex fest punctuated with domestic bliss. But it ends just as abruptly as it began. When I’m called away on a family emergency, I realize too late that I have no way to contact Lainey.

A year later, a chance encounter throws Lainey and me together again. But I still have a lie hanging over my head, and Lainey’s keeping secrets of her own. With more than lust at stake, the truth may be our game changer. (Synopsis from Goodreads)

Seductive. Captivating. And above all else, heart-warming. A second chance romance that will make you swoon.

I picked up this book expecting to read a few chapters will I had some spare time. I figured I would put it down and continue with my day. I was wrong. I read this book in one sitting, which included me staying up half the night to finish it.

I was hooked before I even opened the book. The synopsis hooked me and I had to read it. And the books did not disappoint. From the first page, I was laughing. I knew this book was going to be just as good as I had hoped.

Lainey and Reed made my heart race. They were perfect for each other. Their personalities balanced each other out and they brought out the best in the other.

Lainey was broken yet strong, innocent yet hardened. She had lived through events that could have destroyed her. The fact that she put herself out there and went on her own adventure was extremely impressive. She was scared, but she knew that it would be worth it. Reed. While he doesn’t quite fit as a bad boy with the heart of gold, I think I want to call him an ex-bad boy. He was strong, determined, and (mostly) responsible. He knew what he wanted and he was willing to do anything to get it.

The writing was smooth and easy to understand. The story flowed easily from one page to another and I never got confused about how or why something happened. I was able to shut off my brain and escape into this world that Hunting created.

However, the ending fell a bit flat to me. The climax of the story was not as intense as I wanted it to be. There was no angst. There was no urgency. I wanted more. I expected every single twist this book threw at me and knew exactly what the “big reveal” was from the very beginning. I just wish that Hunting had thrown something in there that would have caught me off guard.

This is a sweet, comforting novel that is perfect for someone to curl up with after a long day.

I gave this book 4 out of 5 stars. I recommend it to all the romance lovers out there.