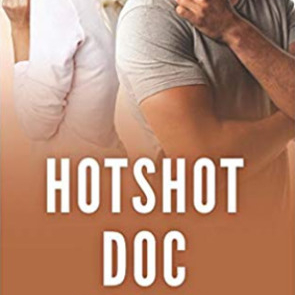 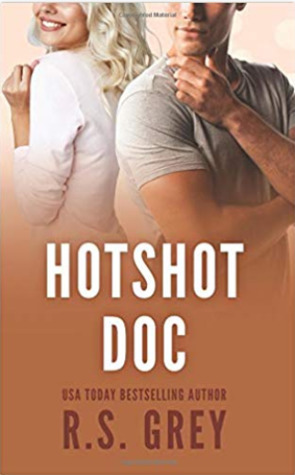 Hotshot Doc is a standalone romantic comedy by R.S. Grey. This review will be spoiler-free.

Dr. Russell has a bad reputation around our hospital. The scrub techs say he’s cold-blooded, the nurses say he’s too cocky for his own good, and the residents say he’s the best surgeon in the world on the off chance he’s within earshot. I try to avoid him and his temper at all costs. It’s just as easy to admire his sexy, grip-it-while-he’s-ravishing-you hair and chiseled jaw from a healthy distance.

Unfortunately, my plan crumbles when my boss decides to swap his white coat for a Hawaiian shirt. His retirement leaves me with two options: switch specialties and spend months retraining, or take an open position as Dr. Russell’s surgical assistant. That means I have to stand near him in the OR for hours on end and anticipate his every need without letting his biting words and bad attitude intimidate me.

Oh, and as if that’s not difficult enough, my silly crush on him-the one I’ve tried to stomp on until it disappears-might just be reciprocated. It’s fine. I’m fine. I take my job seriously. There will be no smoldering bedroom eyes across the operating table, no angry almost-kisses in the supply closet. (Well, no more of those.)

What’s the phrase? An apple a day keeps the doctor away? Maybe I should go for a whole damn bushel.

R.S. Grey has yet to disappoint me. Her books are all so unique. While she writes the tropes, she writes the well! There were so many tropes in this book. The hot doctor. Enemies to lovers. Slow burn. But even with that, it all comes down to the characters.

Bailey and Matt. Bailey is responsible, caring, and down to earth. She takes care of her teenage sister with no complaints. She has stepped into the role of single-parent without having a child of her own. Matt is hard-working, determined, and compassionate. He spends all of his time trying to be a hero to the children that come into his office. They make a good team both in and out of the OR.

I’m not going to lie. I love me a hot doctor. I mean who doesn’t? But I’ve always found that their romance stories felt unbelievable and forced. No matter how good they are. This one didn’t! They weren’t stupid around the office and they didn’t do anything to endanger their patients. This made me love the story even more.

There are several side characters but the most important ones are Cooper and Josie. I did not like the addition of Cooper. I guess I understand why he was included in the story but I think it took away from the romance between Matt and Bailey. Josie, on the other hand, I loved! She was such a sweetheart. She reminded me of how I acted as a younger sister.

I read this book in one sitting. I couldn’t put it down. When I finished it, I just kind of looked around confused as to where I was. R.S. Grey has officially been added to me “Authors To-Watch” list.

Overall, I really enjoyed this book. I don’t think it’s my favorite R.S. Grey novel, but it was still really good. I gave it 4 out of 5 stars. If you are looking for a fun, flirty book that will whisk you away, this is the book for you.