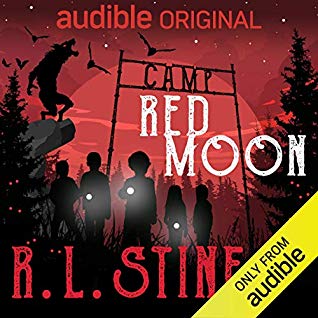 Camp Red Moon by R. L. Stine is a collection of scary stories performed in audiobook format. This review will be spoiler-free.

Camp nights or camp frights? Every sleepaway camp promises memories that last a lifetime. But the memories from Camp Red Moon might give you nightmares!

The campfire appears to dim when the moon turns blood red and strange creatures prowl the forest. Do you find a total lookalike at camp? Is it coincidence or is he a shapeshifter trying to take over your life? Why don’t your competitors at the robotics competition seem exactly…human? And why do campers do anything to avoid Cabin 6?

Fun. Spooky. Nostalgic. A collection that will take you back to your childhood with every story.

There are four short stories in this book. They are all set at a summer camp called Camp Red Moon. Camp Red Moon is a place of monsters and ghosts, but every summer kids come from all over the country to stay there. These are all fun, spooky stories that people would share around a campfire, and they actually do in the book.

The Werewolf in the Woods. The New Camper. Battle of the Bots. The Ghost in Cabin Six.

This is a book for a much younger audience, but if you know that going in, I think that adults can enjoy it too. I, unfortunately, did not know this going in. The first story was by far my least favorite. I almost turned it off and walked away, but I’m glad I didn’t. The New Camper was my favorite, with The Ghost of Cabin Six coming in a close second.

Each story was unique and spooky, but they were tired together by the setting of Camp Red Moon. There was even a character that crossed over between the different stories. I would have liked more overlapping details, but it wasn’t necessary. The scene was set and I knew what to expect.

If you find yourself picking up this book and you aren’t impressed by the first story, then I highly suggest skipping to the second one. You don’t need to read them in any certain order to understand what is going on.

I wasn’t as impressed as I was hoping to be by this collection, but I think it is a quick Halloween read that most will enjoy. I gave it three out of five stars.