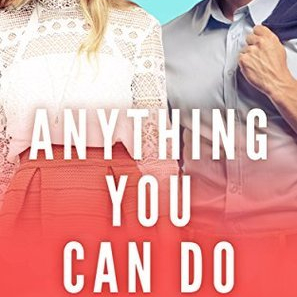 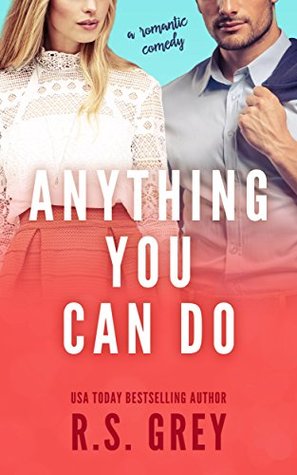 Anything You Can Do is a standalone romantic comedy by R.S. Grey. This review will be spoiler-free.

Lucas Thatcher has always been my enemy. It’s been a decade since I’ve seen him, but our years on opposite coasts were less of a lasting peace and more of a temporary cease-fire. Now that we’re both back in our small town, I know Lucas expects the same old war, but I’ve changed since high school—and from the looks of it, so has he.

The arrogant boy who was my teenage rival is now a chiseled doctor armed with intimidating good looks. He is Lucas Thatcher 2.0, the new and improved version I’ll be competing with in the workplace instead of the schoolyard.

I’m not worried; I’m a doctor now too, board-certified and sexy in a white coat. It almost feels like winning will be too easy—until Lucas unveils a tactic neither of us has ever used before: sexual warfare.

The day he pushes me up against the wall and presses his lips to mine, I can’t help but wonder if he’s filling me with passion or poison. Every fleeting touch is perfect torture. With every stolen kiss, my walls crumble a little more. After all this time, Lucas knows exactly how to strip me of my defenses, but I’m in no hurry to surrender. Knowing thy enemy has never felt so good. (Synopsis from Goodreads)

Sexy and Steamy. An enemies to lovers romance that will curl your toes and leave you wanting more.

R.S. Grey did not disappoint with this one. This book probably made me laugh more than any other Grey novel I have read. It was hilarious. I really enjoyed every second of it.

Daisy and Lucas. The tension between these two characters was so thick. They had chemistry and passion. It was clear from the very start that these two were either going to kill each other or they were going to fuck. There was something boiling beneath the surface and I was flying through the pages waiting for them to break.

There was nothing special about the setting of this novel. I don’t even remember what the small town was called. But the setting wasn’t important. The only thing that matters is that these two were forced back together by a cruel twist of fate.

The pacing of this story was perfect. I was on the edge of my seat the entire time I was reading this book. I finished it in one sitting and was disappointed when it ended. I wanted more! I loved these characters and I was sad to say goodbye to them.

I think my biggest complaint about this book was how childish the climax was. I loved the idea of doing what needed to be done, but could the characters think of something a little bit better than that? It was a big disappointment for me. It pulled me out of the story.

Overall, I really enjoyed this book. I gave it 4 out of 5 stars and highly recommend it to anyone looking for a fun, enemies to lovers romance.