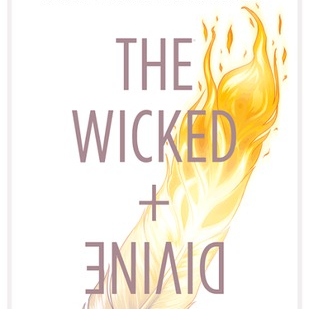 The Wicked + The Divine, Vol 1 is the first installment of the graphic novel series by Kieron Gillen and was illustrated by Jamie McKelvie. This review will be spoiler-free.

When I read the description of this graphic novel, I thought it was going to be amazing. The concept for this story is brilliant and unlike anything else I’ve ever read. I had extremely high expectations.

The art in this collection was beautiful and simply breathtaking. Probably some of my favorite illustrations that I’ve seen. They were colorful and polished. I was captivated by each and every image. The details were amazing.

Unfortunately, that was the best part of the book. I found the story hard to follow. There is a fine line between leaving the reader curious and leaving them completely confused and unable to follow what is happening. I feel like if they had taken the time to explain some of the events that were happening and give the reader a little more background information that it would have been much more enjoyable. I actually had to double-check that I hadn’t accidentally started on volume two.

There were so many characters that were introduced and then a handful more that were talked about and never actually seen that I couldn’t keep anybody straight. It got to the point that it just wasn’t enjoyable to read.

Laura and Luci were fun, interesting characters to follow throughout the course of this novel, but we barely learned anything about them. I can understand not revealing everything upfront, but I finished the entire volume and didn’t feel like I knew anything about the main characters.

Overall, I was seriously disappointed by this graphic novel. I gave it 3 out of 5 stars, but only because the artwork was so striking. I hate to say this, but I don’t think I’m going to read any more in this series.