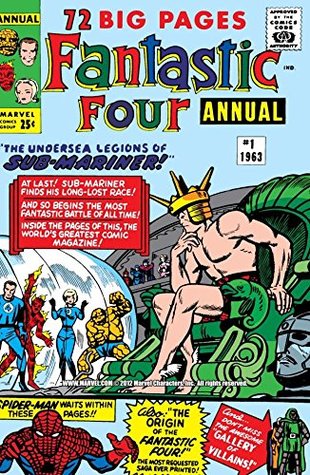 Namor has finally reunited with the lost people of Atlantis–and has decided to declare war on the surface world! It’s up to the Fantastic Four to save the human race from an Atlantean army! (Synopsis from Goodreads)

Fantastic Four Annual (1963) #1 features my favorite Fantastic Four villian, the Sub-Mariner, after he is finally reunited with his people.

This issue was great! I was a little worried about how long it was, but it was worth it. Ever since we met the Sub-Mariner, he has been trying to find his people, so this issue was a long time coming. And it was the perfect story for this extra-long issue.

We learned so much about the Sub-Mariner in this issue. While the Fantastic Four didn’t really reveal too much new information about themselves, the Sub-Mariner felt very well rounded in this comic. We saw his kingdom and learned more about his life before the bomb destroyed his home.

(And I have to point out that Sue got kidnapped again. Come on girl! Get. It. Together.)

It was an action-packed, thrilling issue, but there is more! I really enjoyed the look back at all the past Fantastic Four villains. There were some that I had even forgotten about until I got to their feature page. It was a nice reminder of all the group had been through.

I think my least favorite part of this issue was the extended Spider-Man story. I enjoyed reading it in The Amazing Spider-Man (1963) #1, but the extended scene did not interest me. Also, the cover says, “Also, ‘The Origin of the Fantastic Four!’ The most requested saga ever printed!” But there was no mention of the origin of the group, which was extremely disappointing.

Overall, I think this is probably one of my favorite Fantastic Four comics I’ve read, which is good because the last few were really disappointing.