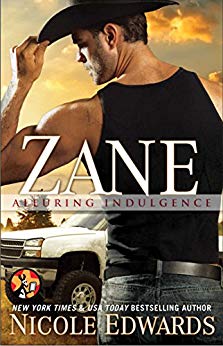 Zane is the second novel in the Alluring Indulgence series by Nicole Edwards. This review will not hold any spoilers for Zane, but it WILL have spoilers for Kaleb, which is the first book in the series.

Vanessa and Zane must face the consequences of an attack on Zane. Vanessa struggles to open herself up to those around her and to trust her own heart, but there is something about Zane that she just can’t get over. Luckily, Zane feels the same way about her. Can Vanessa learn to trust or will Zane walk away for good?

I went into this book expecting it to be even hotter than the first one and I was not disappointed. While this book did push a little out of my comfort zone, I am invested in this family, town, and resort. I need to know what happens next. Just make sure that you are prepared to see a variety of sexual acts before going in.

Vanessa comes from a single mother with a bad reputation and is terrified of what others think of her. All she has ever wanted is for the town to understand that he is not her mother. She struggles to cope with what happened to Zane, but she is such a strong character. She has faced more than most people could handle and still manages to get out of bed each day.

Zane is the youngest of the seven Walker brothers, but he is no child. Anger issues and pure determination are two key aspects of his personality. When he wants something he goes after it, no matter what and does not allow himself to regret his actions.

This pair was really interesting to follow throughout the course of the book. I struggled to get into it but once I got about 20% of the way in, I was hooked and finished the rest of it in one sitting. I was caught off guard by several of the events that took place and the secrets that were revealed.

I got caught up in the story and did not pay attention to the writing itself, which means that it was not distracting. My one complaint about this book is that sporadically throughout the book, Edwards introduced a new POV and it was quite jarring as a reader. I was comfortable with the shift between Vanessa and Zane, but I was not prepared to see through anyone else’s eyes.

I gave this novel 4 out of 5 stars and would recommend this series to anyone who likes to explore the more diverse sides of sexuality and the erotica genre as a whole.

Reading Pillow Thoughts by @courtneypeppernell and this poem hit me right in the chest. Beautiful. ❤️❤️❤️❤️❤️ #poetry #amreading #reading #pillowthoughts #courtneypeppernell
What better way to dive into my first round of edits than to pull out all my craft books and do some reading? I’m hoping to make my way through these books as I work on this draft. Which craft book is your favorite? Have any other recommendations? ✨ #reading #readingaddict #writersofinstagram #writer #writerscommunity #writingtips #writerslife #writewritewrite
Guess who is FINALLY diving into the first round of edits on Secrets and Shadows! Draft Four here I come! I got one chapter done today and it feels so good to dive back into this world of mine. It is surreal to see this in print. I have been wanting to print it out for a while, but always put it off. My dear friend @aeescence inspired me to finally take the leap and I couldn’t think of a better way to start of this draft. #writersofinstagram #writing #writer #writingcommunity #writerslife #amwriting #amwritingfantasy #amediting #ameditingfantasy
I read the Stalking Jack the Ripper series by Kerri Manscalco a few months ago and I am still not over it! ✨ Here is my review: Haunting. Dangerous. Dark. Captivating. A thriller that will stay with you long after you turn the final page. This book was everything I wanted it to be and more. I had such high expectations for this book and I was not let down. I was completely absorbed in this book as I read it. I couldn't focus on anything else. Audrey Rose. Thomas. Dr. Wadsworth. Nathaniel. Lord Wadsworth. This book had so many diverse, complex characters. Each character had their own personality and traits. The twists and turns kept me guessing. I had so many theories about this book. It kept me on the edge of my seat and I flew through its pages. The writing was beautiful. From the pacing to the word choice, this book was written by someone who really knew what they were doing. A high-stakes plot teamed up with stunning writing to create a book that made it onto my all-time favorites list. I loved every single second of it. ✨ If you want to see my full review and rating, check out the link in my bio! ✨ #bookstagram #book #booklover #booknerd #bookworm #bookstagrammer #booksofinstagram #bookish #bookrecommendations #bookreview #bookreviews #bookreviewer #amreading #amreadingmystery #reading #readingaddict #stalkingjacktheripper #kerrimaniscalco
I’ve been thinking a lot about what is is impossible and what is realistic. I have so many dreams, but are these dreams realistic? How can I turn these dreams into a reality? I want to be a bestselling author. I want my books turned into movies. I want fan art and fan tattoos. I want writing to be my career. I want my books to mean something to people. Right now, these things seem impossible. But are they really? I need to find a way to break these dreams down. I need to make a plan. So that’s what I am working on right now. How can I turn these seeming impossible dreams into my reality? Step one: Write today. And tomorrow. And the next day. Make daily writing a habit. ✨ Do you have any dreams that feel impossible? Are you actively trying to turn them into a reality or are you just wish on stars like me? ✨✨✨ #writersofinstagram #writing #writer #writingcommunity #writersconnection #amwriting
Writing Update: I had a lot to say this week. So I turned it into an actual blog post. If you are interested the link is in my bio, but here is a snippet. ✨ I pulled out my copy of Save the Cat and a few hundred sticky notes. I wrote down everything I knew. Everything I wanted. Every snippet I had come up with. I called my sister, who is my go-to soundboard and bounced my ideas off her. Together, we shot down every single one I had down. I just couldn't figure out where this story was headed. I decided that maybe the idea just sucked and that why it wasn't working.  I sat down one last time to try and get the second act plotted. I decided that if I couldn't make some headway in the second act by the end of the day, I was going to shelve it and work on something else. I got a rough outline done in just a few hours. Then I went back and gave myself a few more details. I did this again and again. Adding scenes. Rearranging scenes. Deleting scenes. I am definitely not a pantser. I am 100% a plotter.  I am setting new goals for myself and I cannot wait to get those words down. By not forcing something that wasn't working, I rediscovered my love for this project. ✨✨✨ #writing #writersofinstagram #writerscommunity #writingcommunity #writinginspiration #amwriting #amwritingfantasy #writer